We started out under the worse possible conditions…. low clouds and pouring rain. „We“ were  5 members of the Babenhausen flying club, Janko Dspot, Mike Reining, Rainer Korff, Astrid Krone and me in 2 Piper Arrows.

The first leg was to take us to Westerland, Sylt, where we planned to refuel and continue on to Bergen, Norway.

Rainer and Astrid flew the D-EBES and Janko, Mike, and me alternatingly flying the D-ELGH.  For the first leg Janko was PIC and Mike his co while I made myself „comfortable“ in the back seat. One seat had been removed to allow for more baggage and to give us more weight allowance.

In spite of the rain we arrived in Westerland as planned, refueled, then continued on over Denmark toward Bergen. On this second leg Mike was PIC and I was Co. The weather was better but not as good as hoped for. Our route toward Bergen, after crossing the waterways between Denmark and Norway, was supposed to be over the inland mountains, but the farther north we flew, the lower the clouds became. Rainer and Astrid were already trying the coastal route. I soon navigated Mike westward „toward the bright spots“. We soon reached better conditions and were continured northward where we landed without any problems in Bergen.

But where were Rainer and Astrid? As it turned out, because of the deteriorating weather they had decided to land at a military airfield somewhere off the coast and couldn’t arrive in Bergen until the next day.

In the meantime the rest of us found a youth hostel for the night. The personel at Bergen were extremely helpful. In fact, during the whole trip the Norwegians helped us along, found hostels for us to stay in, drove us from our planes over to the tower, etc.

The next morning we checked the weather and planned our next leg. For this leg I would be PIC and Janko my Co. It was planned to fly to Namos for refueling before continuing on to Trompsø for the next over-night stay. According to my old documents, this leg was to be 330 km.

Soon Rainer and Astrid arrived, landing on Runway 36. They taxied to a parking position near the tower while we were parked farther south. After exchanging tales of the previous days events and discussing the details for the days flight, we went to our aircraft to prepare our departure.

In the meantime the runway had been changed to 18. I began to taxi toward 18 and soon heard the tower calling „D-EBES , taxi to rwy 18…. „. Looking out ahead of me, I noticed a PA-28 heading toward me. Again the tower radioed the other plane to turn around. They kept coming. Rainer speaks no English at all and Astrid wasn’t used to it. Soon I realised that they didn’t understand that they were being talked to, so I grabbed the microphone from Janko and said in German „Turn around, you’re going the wrong way!“ Suddenly the PA-28 stopped and started making a 360 to reverse direction… finally! We decided later that we would alwas fly as a formation and that our aircraft would cover the radio work from now on…. and that worked fine…. there were no more problems after that. This leg took 3 hours and 5 minutes according to my log book and was 330 km.

4th leg from Namsos to Trompsø

After refueling we continued our trip up north. The landscape got bearer, wilder, more and more interesting…..and  between Namsos and Trompsø we also crossed the Artic Circle.

with  the D-EBES in formation. and   flying over a fisherman’s house.

After two and a half days we reached the North Cap of Norway! The weather was hazy but quite flyable and we were able to circle the northern most point of Europe.

Janko in front of the tourist center.

Again we stopped in Trompsø to refuel and then continued on to Leknes on the Lofoten.

The Lofoten are a group of islands off the coast of Norway. Again we found a nice camping ground to stay in and enjoyed the midnight sun at a local restaurant. It was really fun to walk back to the campground at one o’clock in the morning in DAYLIGHT!

The next day, June 19, we headed toward Kristiansund where we again with the help of the tower personel found a youth hostel to stay at. After our landing we had been picked up by a bus and taken to the other side of the airfield where the tower was located.

The next morning we took the bus back to the airfield. After arriving, Mike realised that he had left his bag with all his papers in the bus! Again the tower crew helped us out. They called the bus company only to find out it was in the workshop! The bus company found the bag and brought it to the field via a taxi!

I can’t give the Norwegians enough praise for their helpfulness and hospitality!!

The next leg, from Kristiansand to Flensburg, was again mine as PIC and took 2 hours and 10 minutes.  It was to be a very challenging flight. First of all we had to fly over a long stretch of open water to the north Danish coast.

On we flew to Kristiansand on the south tip of Norway. Notice the names are similar…. one with …sand, the other with ….sund.

The next leg, from Kristiansand to Flensburg, was again mine as PIC and took 2 hours and 10 minutes.  It was to be a very challenging flight. First of all we had to fly over a long  stretch of open water to the north Danish coast.

The pictures above show beautiful weather and very much changing countrysides. But then the weather over Denmark became increasingly bad with thunder storms and heavy rains. I tried to keep my distance from all the thunderstorms yet still trying to keep eye contact with the D-EBES. We soon lost sight of each other and it was each on his/her own. The visibility decreased… it got to be barely legal and was definitely no fun.

With the help of old friends of my husbands family we found a very inexpensive hotel in the old town of Flensburg, Germany.

On June 21 we embarked on the final stage of our journey, arriving safe and sound back in Babenhausen.

After many discussions I decided to learn to fly. The flying club wasn’t far from where I lived, which made it easy. I learned on a powered-glider, a 2-seater called Falke, a fairly simple aircraft.

Then came the date for my flight test. The day before, a pilot managed to crash the plane, bending the propeller…luckily nothing else. The propeller got changed and we waited for the examiner to arrive. He came, we took the test flight which I passed.

At the time George Fengel was the clubs president. 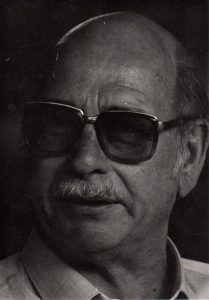 My primary instructor was Rainer Korff. 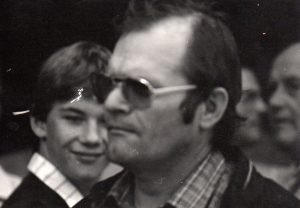